We did another live show today and since we had so much fun, I think we’ll be doing them on a regular basis. Today our lead financial coach Kevin Suddick filled in for Janelle and we talked about his story and how he & his wife Lori eliminated a bunch of debt in a short time.

The live shows will be every Tuesday at 10 a.m. CST. You can watch live and join the chat at financialexcellence.net/live-show 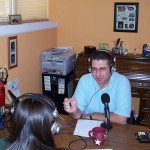 Previous Post: « Using Debt as a Tool… or Playing with Fire?
Next Post: Love Drop June 2011: the Aubin Family »