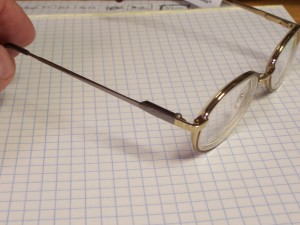 Should I break down and buy new glasses?

I’ve had a run of bad luck lately where Murphy has been trying really hard to move into my spare bedroom. We’ve managed to keep him out of the house for the most part but he’s still managing to harass us from the sidewalk.

A few months ago my glasses broke. They’re the type with the little nose pieces that bend really badly if you get hit in the face. As luck would have it, rough-housing with the little guy often results in me getting hit in the face somehow. This of course results in bent nose pieces on my glasses. One or two times and you’re fine, but eventually the metal on the nose piece gives out and the glasses are broken.

Well that’s exactly what happened so I was faced with a decision. Should I spend a few hundred bucks that I didn’t really have at the time (except in the emergency fund) or should I resurrect my old glasses. I have no idea why I was keeping the old ones around but there they were on my dresser.

What did I do? Yep, I decided to tough it out with the old prescription and avoid spending the money. I planned on buying new glasses at some point, but now wasn’t the right time. Especially since my daughter suddenly had trouble seeing things far away. She needed glasses before school started so her glasses took priority over mine.

The plan of using my old eyeglasses worked for a month or two. Then Murhpy came back and hit me in the face. Out of nowhere, the right temple (that’s the thingy that goes from the lens back to your ear) broke. Now I had no glasses to wear and no contacts (my eyes get too irritated so I can’t wear contacts anymore).

Luckily my buddy Joel at Visionary Eye Care hooked me up. Joel is the optician there and he just happened to have a spare temple from the same manufacturer. The color doesn’t match and it’s a different length, but it works. For now. Will people notice I have two different colors and styles on my frames? I don’t know but at this point I’m not too worried about that. I’m just glad I can see and it didn’t cost me anything yet.

So am I too cheap? Should I have pulled the money out of the emergency fund to get a non-mismatched pair of glasses? What would you do? Have you worn tape on your glasses before to avoid buying new ones? I’d love to hear your thoughts.

Previous Post: « The Seven Day Stamina Challenge
Next Post: Re-Branding Your Business: Is it a Good Idea? »