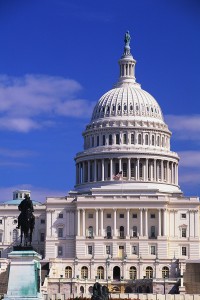 There’s a lot of debate going on in Congress about the federal budget and the cuts we need to make in spending. Republicans keep asking for larger cuts, and the Democrats (grudgingly) concede. Sounds like we’re making progress on being fiscally responsible, doesn’t it? After all, they’re working to cut back and reduce the deficit. But there’s a major problem with what’s going on: As much as $61 billion sounds like a big number, it doesn’t matter one bit if they cut that much out of the budget.

That’s right. Cutting $61 billion out of the federal budget won’t help things at all. Congress is overspending $1.33 trillion every year. That’s $1.33 trillion dollars above and beyond what we have to spend. That’s $1.33 trillion deeper in debt that we’re getting each year at our current spending rate. In other words, Congress thinks it’s ok to spend $1.33 trillion more than they have. Each year. Let’s see, that would be $1,339,088,000,000 (give or take. For updated numbers check the national debt clock).

But wait! Our politicians are fighting to cut spending! They’re doing the responsible thing and (depending on which side wins the argument) cutting up to $61 billion out of the budget so we can “tighten our belts” and really cut back on this overspending. At least that’s what they tell us.

Really? They’re working hard to cut back? Let’s examine what this really means:

If Congress REALLY wanted a balanced budget, we wouldn’t be squabbling over a few billion dollars here or there. We need to cut a trillion and a half dollars out of the budget if we want to stop going deeper in debt. In a time when the President thinks we need to print more money to pay our debts, I would think our goal would be to get out of debt. However, our political leaders’ actions certainly don’t indicate that debt reduction is an important goal for them.

It’s time Congress puts our money where their mouths are and start making some serious cuts in the budget so we can have a future as a country. I know it will be painful for everyone. But if we as citizens are cutting back on spending to make ends meet, why can’t the people we elected to represent us do the same? I can guarantee you one thing: as painful as it is to cut over a trillion dollars out of the budget, it’s not nearly as painful as what we’ll experience as a nation if we keep spending more than we make.