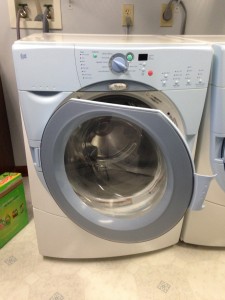 I wrote a post a while ago about the pitfalls of the infamous front load washers and how they aren’t all they are hailed to be. At the time I owned an old-school top load washer that used much more water and had much smaller capacity than the newer front load washers do. When it broke down, we weighed the options of replacing it with a newer HE washer vs. repairing it to keep it limping along. We opted for repairing the old washer because the HE washers just aren’t reliable enough to justify the cost of buying a new one.

When we moved to our new location in Iowa, we inherited a newer HE front load washer with the house we bought. That was pretty cool since we had never owned a front loader. I don’t think we would have bought one new but since it came with the house, life was good. Until the washer broke 18 months after we moved in. It just stopped working in the middle of the rinse & spin cycle.

Naturally we feared the worst and started planning to buy a new one, which we figured would cost us upwards of a thousand dollars. It was about 10 years old so we thought it was probably on its last leg. Especially since the average lifespan of an HE front load washer is only 10 years. And there’s a pretty broad range in there, meaning some only last six years and some last 14 or more years. So we weren’t really sure how long to expect it to last.

Having said that, I don’t think the life expectancy number factors in things like repairs. I’m guessing it’s the average number of years before repairs have to be performed. In this case, our washer is about average. So now our decision is whether to spend a bunch of money on a new one or a little money on repairs.

We really didn’t want to spend that much so we decided to call the repairman instead. $250 later, the washer is up and running with a new water pump. We probably could have bought a used washer for less but then you run the risk of having one that needs even more repairs. This way, for a relatively small amount of money we have a high capacity front load washer that should continue to run fine for some time to come. No guarantees on the service life, but it seems to be running really well after the repair.

So we had to adjust the budget for this month to cover the extra $250 expense. Yes, it was an adjustment, but it was way better than dipping into the emergency fund for $600-1200 to buy a new washer. Much like the last time we repaired the old washer, we saved some money by spending a little money. And the best part of the story is that it really wasn’t much of an adjustment. Since we’re debt free except the house, it’s a lot easier to make adjustments to the budget. We just changed what we were doing with some of our disposable income and moved on.

Have you had unexpected repairs to your appliances? How did you deal with the extra expense in your budget?

Leave a comment below to let us know your thoughts!