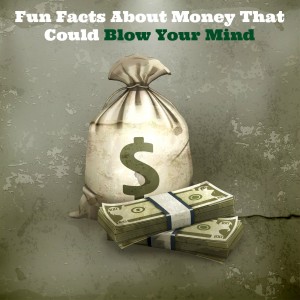 2. Abraham Lincoln was the first person to appear on a regular US coin in 1909.

3. Before the days of paper money, Americans traded animal skins, including deer and elk bucks, for goods and services. Hence the word “buck” to describe money.

4. 60% of working Americans experience moderate to high levels of financial stress. One-fifth of those believe their financial stress has gotten worse in the last 18-24 months.

5. A piece of currency can be folded forward and back 4,000 times before it will tear.

7. When asked how they make their retirement planning decisions, 44% of working Americans say they guess.

9. 70% of Americans live paycheck to paycheck.

12. There are twice as many Payday Lenders as there are Starbucks locations.

14. A Parenting Magazine poll indicates that 49% of us could not cover even one month’s expenses if they were to miss a paycheck.

16. The U.S. has about $158 billion in personal savings and an average savings rate of only about 2%.

17. Most people won’t bend over to pick up money lying on the sidewalk unless it’s at least a dollar.

18. More money is spent on gardening than any other hobby.

19. Abraham Lincoln faces to the right on the penny while all the other presidents face to the left on U.S. coins.

20. There are two credit cards for every person in the U.S.

21. 22,000 checks will be deducted from the wrong bank account in the next hour.

22. The average credit card debt among all American households is $8,400.

23. A typical credit card purchase ends up costing 112% more than if cash were used.

24. The average per household debt in the US, not counting mortgage debt, is about $14,500 – Especially noteworthy because in the 1930’s, most middle & working class people had no major debts. Banks would not lend to them; they rented their homes and if they did own a house, it was paid for as it was being built.

26. If you have three quarters, four dimes, and four pennies, you have $1.19, the largest amount of money in coins you could have without being able to make change for a dollar.

27. The average life of a dollar bill is eighteen months. Five dollar bills last about fifteen months, with twenties remaining in circulation for two years. Ten dollar bills have about the same lifespan as singles do, and the larger denomination bills can last up to eight years.

28. The face of a penny can hold about thirty drops of water.

30. Excessive use of credit cards is cited as a major cause of non-business bankruptcy, second only to unemployment.

What is a fun fact that you have heard about money?

Previous Post: « 5 Great Ways to Reduce Costs This Summer
Next Post: Investment Plans for 2015: Why House Flipping can help your Money go Further »