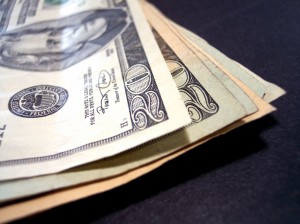 Those who know me well know that I’m a bit of a cheapskate. At least that’s the reputation I’ve developed over the years. I personally prefer the term frugal over cheapskate, but either way I’m well known in various social circles as one who makes do with little and rarely spends money.

Indeed, for the past six years or so, I could probably count on one hand the number of purchases we’ve made that were more than $300. And I’m pretty sure I would have some fingers left over to count some more. Anyway, it’s been a really long time since we spent a lot of money. That’s the lifestyle we developed while getting out of debt – you can’t get rid of your debt very quickly while spending lots of money on luxuries.

Once we were debt free and had an emergency fund in place, I lost my job and went into full-time self-employment. When you’re self-employed, you have to be very careful with your finances. We didn’t have much of an income, so we didn’t really have the option to spend money on anything but the necessities. We just got really good at not spending money.

The Urge to Spend

Then, after six years of uber-frugality, we went on a spending binge. In the past 12 months, we have purchased new living room furniture, a new LCD TV, a new stainless steel french door refrigerator, an iPad, an SLR camera, a snow blower, and most recently a new (used) vehicle. Holy cow! That’s one heck of a spending binge!

Or is it? Actually, these were all calculated purchases with a plan. We’re still debt free (except a small mortgage on the house). We didn’t use a credit card or buy any of these items on impulse. We budgeted for each of the purchases and saved up so we could pay cash for all of them. And we bought them all with an emergency fund in place, retirement plans in progress, college savings plans under way, and regular tithing.

We followed all the rules of the L.I.F.E. Ladder. With all the rules in place, it’s ok to spend a little. It just felt really weird. We had held back on some of these purchases for a long time and they were long overdue. But still, it’s been so long since we splurged on ourselves that it just didn’t seem right to splurge again.

I guess that’s an indicator that we’re living in financial excellence. We’ve been strict with our budget for so many years that it has just become part of who we are and how we live. We don’t normally buy luxury items for ourselves because we don’t get a lot of gratitude from material things.

But it is ok to spend a little on ourselves from time to time. That’s actually the point of this whole article. Once you’re debt free and you’re funding your retirement and college savings plans, it’s OK to spend money on yourself. Go ahead. Live a little. Splurge a little. You’ve earned it.

You don’t have to go hog wild like we did (we’re almost done, then back to paying off the mortgage sooner). And you still need to do a monthly budget and pay cash for everything. But don’t be afraid to loosen up the reigns a little bit. That’s what living in financial excellence is all about – sacrificing up front to put yourself in a position where you have extra money to spend and enjoy life.

Are you debt free and afraid to loosen the reigns? Have you spent money recently and it made you feel guilty? Leave a comment. Share your thoughts.

Previous Post: « 4 Ways to Quick Start Your Budget
Next Post: When your values and beliefs about money are tested »