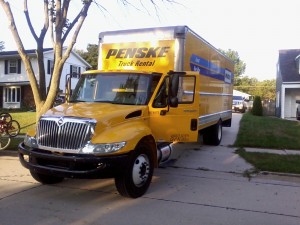 Moving can be an awful expensive venture, no matter how you approach it. If you’re reading posts on this blog, you’re probably the type of person who likes to save money. Me too. When we moved from Wisconsin to Iowa, we wanted to save as much money as possible, too. Being an engineer, I had to run all the numbers and find the most economical solution for our move.

The first thing I did was call around to a few moving companies. I also submitted some requests for quotes online. The initial response was quite positive. Over the phone, without looking at what we had for possessions, I received a few ballpark quotes of $5k. Not too bad, I thought. Considering all the trips I would have to make with my pickup and the trailer I had available, plus a rental truck and all the loading & unloading we would have to do, $5k sounded well worth it.

When we got the quotes over the phone, they asked for an estimated total weight. When we moved to Wisconsin from Oklahoma in 2005, we had 10,000 lbs. That was seven years ago and one less child. We figured we had accumulated a lot more stuff with the extra kid and years of staying in the same house. So I estimated 14,000 lbs. And the quotes were still only $5k. This might just work out!

Then we had them come in and actually do an on-site quote. The story changed a little. We had a lot of bulky stuff, fuel prices were changing, we were likely to move in the peak season, etc. The actual bids that came in averaged $7,200. Still not overly bad, but now we’re well above $5,000. We began to wonder if it was worth paying someone else.

Moving Before the Move

Since I was already living in Iowa and driving back and forth every few weeks to visit, we made the most of those extra trips. I borrowed my dad’s 8×10 trailer and packed it full of things we didn’t need for a while. That became a cold storage unit for us. Each trip I made back to Wisconsin, we packed my vehicle to the hilt with things that could be stored in the apartment. After a few trips we had made quite a dent in household stuff.

My wife then began cleaning out anything that wasn’t needed anymore. Old clothes, toys, books, or anything else she could find that we hadn’t touched in years went into the garage sale pile. We sold most of the stuff in a garage sale, then donated what was left. By the time she was done, we had a lot less stuff to move.

We originally figured with less stuff to move, we would save on what we paid the movers. But after we cleaned a lot of things out of the house, we realized we didn’t have that much left to move. At that point, we started thinking it wouldn’t be so bad to move ourselves. Complete crazy talk, but we went there anyway.

The Cost of Moving Yourself

So I crunched the numbers again. A 26-ft moving truck wasn’t too bad. I have a commercial driver’s license (CDL), so driving a truck doesn’t bother me a bit. My dad offered to help some too, so we had our pickup plus his pickup and his 8×10 trailer again.

I’ll admit it was a ton of work. We have a lot of stuff. And we were moving in August, so the weather wasn’t exactly cooperating. In fact, the weather stunk. Still, we were saving a lot of money and I kept reminding myself of that.

In order to save time (and chiropractor expenses), we hired my buddy Mike at Marchiando’s Moving Service. For a few hundred dollars and a couple hours of his time, his team loaded up all the heavy stuff and all the small stuff we had packed up. It still took us the rest of the day to pack and load everything else. But boy, did they save us a lot of lifting. I had used his services before and I would recommend them to anybody. They’re awesome.

We didn’t have movers help us unload but we did have a buddy from work and a few relatives help out. It’s a lot easier to unload heavy stuff than it is to load it. At least that’s what I told myself… Ok, so it wasn’t really that bad.

So when it was all said and done, here’s how the numbers turned out for savings:

Total Savings: $5,650. Minus our time and our friends’ time to help us move. We had budgeted over $5,000 and were prepared to spend it on movers. Instead we were able to spend the same money on a new couch, new recliner, new coffee table & side table, new fridge, and a 55 inch HDTV. Killer picture for watching football in the new living room!

Readers, have you saved money by moving yourselves? Was it worth it?