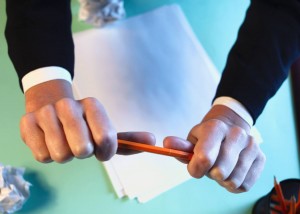 It’s no secret that since I left the world of full-time employment 18 months ago and went full time into self-employment, our budget has been pretty tight. We’ve been able to make ends meet while the businesses grow but there certainly hasn’t been much extra money for wants. But hey, that comes with being self employed and we knew that going into this.

What we weren’t expecting, however, was the full-fledged attack from Murphy. You know Murphy, don’t you? He’s either a lawyer or congressman because he has his own law named after him (Murphy’s Law). Either way, I really don’t like this guy because he got the law passed that says anything that can go wrong, will go wrong. Then sometime in the past few years he got the powers that be to pass an amendment to the law, which requires all those things that go wrong to happen when you have the least financial readiness.

Seriously, though – how come unexpected expenses always strike when you have the least money available? Granted, we’re prepared for emergencies. We’ve got no debt and we have a fully funded emergency fund of more than 6 months in household expenses saved up. But at a time when our income dropped significantly compared to my former career as an engineer, we don’t exactly have a lot of wiggle room in the budget to replenish the emergency fund once we draw from it to handle financial emergencies.

So, in accordance with the law, Mr. Murphy has attacked our personal finances in full force this year. Over the last 12 months, give or take, he has given us multiple car repairs on each of two different vehicles. He caused our water heater to burst, damaging the basement walls and carpet. He caused our washer to break. We figured bad things happen in threes, so we were out of the woods.

But then my glasses broke. I’ve been getting by on an older pair with an outdated prescription. Then our lawnmower’s self-propelled feature malfunctioned. I was ok with that last one because I could mow without the power assist, but then this weekend the mower refused to run properly. It kept stalling in the middle of the job. These are just a few of the little ankle-biter expenses that have been popping up right and left to derail our best efforts at staying on track with our budget and longer-term financial plan.

Talk about frustrating! Just when we think we’re turning the corner on all these unexpected expenses, Murphy comes and slaps us with another one. I know we’re not the only ones, and it feels good to be prepared for these events (praise the Lord we haven’t gone back into debt) but this is getting a little old.

I want to hear from our readers on this one: Has Murphy ever gotten you when you actually had everything going for you, or has he only visited at the most inopportune times?