Myth: My house isn’t in a flood plain so I don’t need flood insurance. Besides, it’s too expensive.

Truth: You need flood insurance, and it’s so inexpensive you’re foolish not to get it. 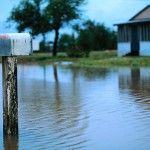 This subject confuses a lot of people. Why would you need flood insurance if you’re not located near a river or lake? Well the answer is really so simple, it’s almost insulting. Yet we never think of this as something that will happen to us. Are you ready for it? Here it is: You might get a heavy rain that floods your basement.

There. I said it. Now I know you’re already thinking of Noah and the ark he built for just such a rain. That’s a lot of rain to come pouring into my basement and mess up the house. We have gutters on the house and sump pumps to keep water away from the foundation and curbs in the street to take rainwater to the storm sewers and away from my house. I don’t need flood insurance.

I could go on with examples of how Mother Nature snuck up on us, but I don’t want to bore you with redundancy. I know, that’s probably too late, but hey, better late than never. The point of all this is that many of those people didn’t have flood insurance because they didn’t live in a flood plain. But they definitely had a flood. Groundwater seepage of any type isn’t covered by your homeowner’s insurance policy unless the sump pump fails or the sewer backs up. When there’s so much water outside that it runs down your foundation walls or pours in through the basement windows, you’re out of luck if you don’t have flood insurance. And when you have flood damage it isn’t just a few thousand dollars. It’s usually a major catastrophic event that costs tens of thousands of dollars to recover from.