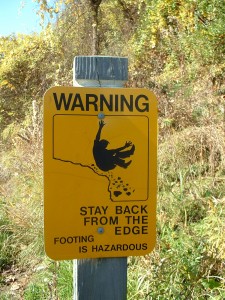 A friend of mine sent me the following today. I’ve seen it before on Facebook and a few other places online but it’s worth sharing again. It breaks down this whole fiscal cliff nonsense into laymen’s terms so it’s easier to relate to.

Let’s now remove 8 zeros from each of the above numbers and pretend it’s your household budget using the same numbers:

Hmmm… makes you think, doesn’t it??

Let’s say you come home from work and find there has been a sewer backup in your neighborhood, and your home has sewage all the way up to the ceilings.

What do you think you should do? Raise the ceilings or clean out the crap?

How I really feel about the Fiscal Cliff

This whole business about the fiscal cliff is nonsense. Our politicians are squabbling over bragging rights. Both parties want to say they’re trying to do something about it while blaming the other party for not being willing to work as a team. All the while, nothing realistic is being done.

The sad fact is, our country actually needs to drop off the fiscal cliff to make any real progress. We need to raise our income and drastically cut our spending in order to balance our budget. And it doesn’t matter if we raise taxes on the “rich” or on everyone – we still won’t come close to balancing the budget without huge cuts in spending. When is Congress going to wake up and get rid of the waste? Probably never, since none of them have the guts to do what’s right for America.

As a financial counselor, I coached countless people through financial makeovers. There was one obvious trend for all my clients who were successful in righting their financial ships – none of them reached success easily. All of them had to make major sacrifices in their spending behaviors to make it work. Our nation is no different.

The irony of this whole situation is that the fiscal cliff is really a good step in the right direction for us, financially speaking. Unfortunately, it’s only happening because those clowns in Washington, D.C. can’t figure things out for themselves.

Readers, are you concerned about the fiscal cliff? How do you think it will impact your personal finances?

Previous Post: « After Christmas Deals: Better than Black Friday
Next Post: Link Love: Giving Credit Where Credit Is Due »