Is it worth your time to do home improvement yourself?

This morning I helped a friend pour a concrete slab at his house. I’m often a fan of hiring a professional to do the job right, especially when the job requires some technical knowledge. I’ve seen plenty of concrete jobs get botched by people who don’t know what they’re doing, and concrete is an expensive project to mess up.

That being said, this is my buddy’s project, not mine. He had an idea what he was doing, and he brought a friend of a friend who had some experience pouring concrete. I myself know more than the average bear about concrete (my undergrad degree is in civil engineering). So between the three of us we figured we had it handled. 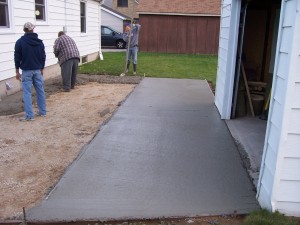 As it turns out, we did have it handled quite well. It wasn’t a large project and most of the prep work was already done so it only took us a few hours to pour and trowel the whole slab. By noon, we were done and everyone had gone home.

Still, as we wrapped up the project I couldn’t help but wonder if my buddy was really saving enough money to make it worth his time to do it himself. Being the blunt person I am, I just came out and asked him how much he was saving. Here’s what we figured out:

To have the slab professionally done:

To do it himself:

His total savings just for pouring the slab were $436. Plus, he saved on the demolition, which would have cost quite a bit in labor. On the downside he gave up two weekends of his time to do the project. Was two weekends of time worth the savings? For him, obviously it was. For me, I’d have to be confident I could get the job done right. In this case, it turned out quite well, and I think the savings was worth his time.

Would you attempt a project like this on your own or hire a professional?