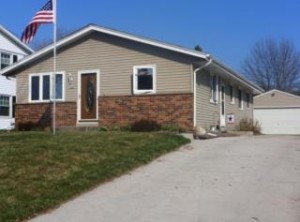 Ok, I have to admit. To say the market in our area stinks is putting it lightly. I really don’t think it stinks. I think it flat out sucks. So when we made the decision to move to Iowa, we knew we weren’t exactly going to have a smooth transition. We knew selling a house in a bad market would not be easy.

But we didn’t fully know what we were in for either. The true value of real estate is whatever someone is willing to pay for it. It doesn’t matter how much you paid for the property or how much money you put into remodeling or fixing things. If a buyer isn’t willing to pay your asking price, the house isn’t worth the asking price.

In our area, the market is down about 30% from the high price levels of 2007-2008. We bought our house in 2005, so we knew we stood to lose 25-30%. That sounds like a lot but it really doesn’t hit home until you look at the actual dollar amount. So when we sat down with the realtor and started talking about a price $30,000 lower than what we paid, it wasn’t a good feeling at all!

Especially since we had listed the house the previous year for $15k more. We knew it was a slow market then but we were just putting out the feelers to see what would happen. Aaaaannnnd, nothing happened. No surprise there.

A new year for selling

But this year we are motivated. I already accepted the new position in Iowa. We need to get the house sold and find a new one before the summer ends so we can get the kids registered for school. And, as I mentioned in my last post, The New Journey Begins, we want to avoid signing a 1-year lease in a small apartment where we would all eventually go crazy.

So we priced to sell. No biggie. We’ll lose a chunk of money but we’ll find a bargain on the other end so it’s all good, right? Well, it just so happens that the housing market in the Ames, IA area hasn’t been hit as hard as other areas of the country. So the bargains aren’t there. Oh well. We still need to sell so we can buy the next house. So on with the massive losses!

Anyway, this should be a quick sale. We priced the house competitively. We did a spring cleaning on steroids. We hired a professional window cleaner. We de-cluttered. We convinced the kids to sell a bunch of their toys as long as they got to keep the money. Deal. We needed to get rid of our junk! Nobody wants to buy a cluttered house. It makes the house look smaller. We needed to stage it so it looked like someone lives there but doesn’t live there.

Last year we put new kitchen flooring in and painted some dark walls with a lighter color. We also had the exterior trim professionally painted. I am so glad we had that done. It wasn’t too expensive, and it was done right so I knew the paint wasn’t going to peel off in another year. Plus, it looks much nicer. Much more presentable to the buyer.

Week 1: We showed the house three times. This is going to be easy! We had lots of good comments from the lookers but none were ready to buy. Most of them said the kitchen was a little small. Not something we can control, so we’ll just wait.

Week 2: One showing. Not exactly improving, but still not bad in a slow market. We’re just excited people are interested in the house.

Week 3: No showings. Uhhh, what’s up with that? Well, it’s still ok. We have plenty of time here. Still, it’s a little unsettling.

Week 4: Two showings. That’s a little better. They’re still saying the house is a little small, especially the kitchen. That darn kitchen. Oh, well, the right buyer will show up at the right time.

Week 7: Two showings! Yay! One actually liked the house. But, then they found a different one they liked.

Week 8: We decided to lower the price to stimulate activity. $5,000 less. It worked! We got another showing. This one looks really good. He really likes the house. Only one catch. He’s not pre-approved for a loan. If he was pre-approved, he would have been ready to make an offer that day. So, we wait a few days. Finally, our realtor calls with the big news! And, the let down ensues: it’s a no-go. What’s up with that?? Why is he even looking at houses if he’s not pre-approved? What a waste of time and emotional energy.

That pretty well catches us up, give or take a week. I think I’m going to do a quick post each week summing up the week’s activity.

So it’s been frustrating. The house is ready to sell, but the buyers have been either looking for something bigger or they weren’t financially ready to buy. Which is a shame, because the house is a really good value. A good house at a low price. It seems what we have is considered a starter home by today’s standards, even though it’s been more than adequate as a family home for more than 30 years.

I’ll be keeping you updated on the progress.

Previous Post: « The New Journey Begins
Next Post: Learn How to Coupon at CVS – Roll Your Extrabucks »