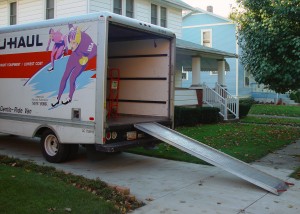 Moving to a New Town.

I haven’t blogged much about this, but I’m in the middle of a career change. Actually it’s more like a return to an old career. I shifted from self employment as a financial coach back into manufacturing engineering. I had a lot of reasons for the change. One of the main reasons was to move closer to family. If you’re really curious about the other reasons, my wife and I talked about them in the final episode of our podcast.

So we are packing up and moving the household to Nevada, Iowa. I’ve already made the move and looked into licensed interstate moving companies who are available to pack up the rest of the fam who will be joining me once the ridiculously long Wisconsin school year finishes in mid-June.

That being said, there are a ton of blogging topics associated with this move. What better time to cover them than while I’m experiencing them first-hand? So over the next couple of weeks I’ll be sharing our moving, house selling, house hunting, and traveling experiences.

Not only will I be able to share some lessons learned, but it’ll give me something to do while I’m alone. Seriously. I’m pretty bored without the kids and my lovely bride to keep me entertained.

So the company I’m now working for wanted me there as soon as possible. We had to decide if we wanted to pull the kids out of school and transfer them or let them finish out in Wisconsin. Mrs. Financial Excellence wanted to finish her job with the school system and the kids wanted to stay with their friends a little longer, so I moved on my own.

Finding an Apartment in a College Town

Nevada is right next to Ames, which is home to Iowa State University (go Cyclones!). Fortunately, that means there are a lot of apartments. Unfortunately, it means there aren’t a lot of apartments available during the school year. Everyone requires a 1-yr lease from August to August. We just wanted a a month-to-month lease since we have no idea when our house in Wisconsin will sell, or when we’ll find a new house to move into.

But no rental companies were willing to accept month to month leases.There were a few apartments available on a short-term basis but they were all subleases that ended in August. I checked Craigslist, I checked rental companies’ websites, and I wore out Google looking for places. I finally found an open two-bedroom apartment through amesrent.com that I could move into right away.

The apartment building is owned by a wonderful couple who recently bought the place and are fixing it up. They didn’t like the idea of a month-to-month lease, but they understood my predicament. I ended up signing a 1-yr lease with the understanding that I would give them plenty of warning when our house sold and we were ready to move into a new place.

Their only request was that I double my deposit so they could cover the cash flow if I left in a hurry. I thought that was fair, since I’m basically occupying a slot in their cash flow plan. And because of me, they might lose a few months of rental cash flow if I move our at the wrong time of the year for them.

So far, so good. I moved just what I needed into the new place and got used to the bachelor life again. Now if we can get our house in Wisconsin sold…