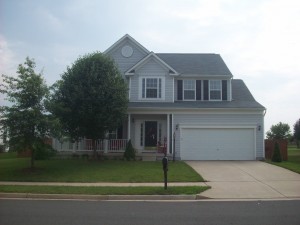 Whether or Not to Buy a House

Over the last few months we’ve been house hunting in our new Iowa location. We found the house we like and put an offer in on it, contingent on selling our house in Wisconsin.

That’s the problem. It’s contingent on selling our other house in a slow market. We’re not sure if this is the right time to buy a house when we still own a different home. We were optimistic about selling the old house quickly even though the market was down. We priced it well and had some decent activity but no offers. That should be fine, though because our offer on the new home gave us until the end of August to sell the old home before the offer expires. Plenty of time.

Or so we thought. As it turned out, the home we placed an offer on held an open house after accepting our offer. I went to it just to meet the listing realtor and visit with her. Plus, it gave me one more opportunity to walk through the house. She was actually excited to have someone to visit with because she didn’t expect anyone to come look at the house.

Competing with other home buyers

The problem was, other people did show up. First one couple, then another one. Both couples were extremely interested in the house. If they made an offer, that would mean my wife and I would have 72 hours to decide if we wanted to move forward with buying the house or give it up.

We started panicking. We really liked this house and had started growing attached to the idea that it was ours. We didn’t like the idea that someone else could come in and buy it before we sold our other house in Wisconsin. So we started crunching numbers to see if we could handle owning two homes.

The numbers weren’t quite as scary as we thought. We factored in the new mortgage, which would be higher than originally planned since we hadn’t sold the other house yet and therefore wouldn’t be able to get the equity out of that house. We factored in taxes on the old house and the new house. We got insurance quotes for the new house and for the empty house. We estimated utilities for both houses (we couldn’t just shut things off in the old house unless we wanted the basement to fill with water). We even factored in the rent and utilies expenses of the apartment we were temporarily living in. We had signed a one year lease and we weren’t sure if we could get out of that lease without paying dearly for it.

When it was all said and done, we realized we could make it work. Things would be a little tight if we didn’t sell the old house. If we didn’t sell the house and couldn’t get out of our apartment lease, things would be extremely tight. But in the worst case scenario, we could make it work. Phew. Time to breathe a little. If we got forced into buying the new house because someone else made an offer on it, we could do it without breaking our budget. Good thing we didn’t have a mortgage on the old house…

Why not buy the house now?

It was at that point we realized something. If we were willing (and able) to move forward with the purchase of the house when forced into it, why wouldn’t we just move forward without waiting for our hand to be forced? Why not take the leap of faith that our old house would sell eventually, knowing that if it didn’t sell we’d still be ok? School would be starting soon and we wanted to be settled in before then, so why not be somewhat in control of the situation instead of waiting and hoping?

So we removed the contingency from our offer and moved up the closing date. The sellers were more than happy to move sooner, so it was all set. Woohoo! We’re getting the house we really want!

Sell our other house!

Find someone to rent our apartment so we could get out of the lease!

Decide on the most cost effective method of moving.

It was time to get moving and put action where the words were before. A lot of work was waiting for us but at least we were finally doing something instead of weighing all the options and scenarios over and over again. It’s amazing how much anxiety can be eliminated by simply being decisive and taking action;

Previous Post: « Link Love: Giving Credit Where Credit Is Due
Next Post: Carnival of Financial Planning #254: Back to Blogging Edition »