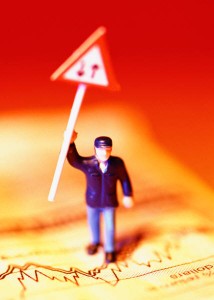 Many of you know I’m back in school studying for an M.B.A. One of the core classes for the degree is economics, which I’m taking right now. I learned something the other day in economics class about some common fallacies in the economics world. One of these is called the Post Hoc Fallacy (abbreviated). What it means is it’s easy to see two unrelated events happen in sequence and make the assumption that there’s a cause and effect relationship between them.

The post hoc fallacy happens like this: Your favorite sports team won two games while you happened to be wearing a specific jersey. You therefore assume that the two events are related. You think that because you wore your “lucky jersey” during those two games, your team won both games. We all know your jersey had nothing to do with the team’s outcome in the game but you’re still tempted to wear the jersey for the next game, aren’t you?

The same fallacy exists almost daily on the news and business channels. At any given moment there’s an economist on tv relating the rise or fall of the stock market to some event overseas that really doesn’t have anything to do with the market. The event may impact a small percentage of stocks or funds, but most of the time it doesn’t have anything to do with the market as a whole. The stock market is largely influenced by supply and demand, which is largely influenced by market cycles in different industries. Industries have ups and downs, just like individual companies do. Some of those ups and downs coincide with some events that happen throughout the world, but that doesn’t mean they’re related.

When you’re investing for the long term you understand this, and you expect to have some fluctuation over time in your portfolio. You buy well-diversified investments that aren’t subject to small changes in the global political scene. You don’t worry about the latest news event and what it means for your investments because you know these events will pass and your investments (if affected at all) will recover and move on with time.

Lesson learned: Don’t listen to the economists when making investment decisions. Every one of them has a different opinion on any given day, and most of them are wrong. Stay the course with your investments. Buy low, sell high, hold for the long term, and don’t put all your eggs in one basket. Make sure you do this with the help of a good financial adviser (not an economist) and you’ll be just fine.

Previous Post: « 063 Financial Excellence: Preparing your House to Sell in Down Markets
Next Post: Using Debt as a Tool… or Playing with Fire? »