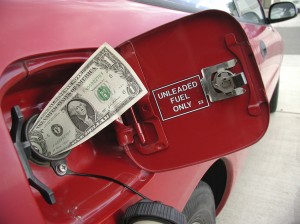 You can’t go anywhere today without thinking about the rising costs of gas and food. It’s tempting to say that the rate of inflation is starting to rise as you feel the pain at the pump and in the checkout line.

But Federal Reserve chairman Ben Bernanke said just a few weeks ago that the rises in gas and food prices are just inflation on the surface.

So far at least, there is not much evidence that inflation is becoming broad-based or ingrained in our economy; indeed, increases in the price of a single product–gasoline–account for the bulk of the recent increase in consumer price inflation.

He says there’s nothing to worry about, and that the price of other consumer goods are just fine. Food and gas prices are rising, but prices of everything else are fine. Basically he claimed there is no real inflation threat for the long-term – it just seems like there is.

“Pay no attention to the man behind the curtain,” says the great Oz, I mean, chairman of the Fed. “These aren’t the droids you’re looking for,” asserts Obi-Wan Bernanke. Sounds a little like smoke and mirrors, doesn’t it?

Well, maybe it is. Bernanke issued that statement on June 6, 2011. Now the results are out in late June that U.S. Core Inflation rate is on the rise. What does that mean? It means that prices for all the other stuff besides food and gas are rising. Hmmm. No inflation? Nothing to worry about? Core inflation rose in May by 0.3%, the biggest one-month increase in 5 years. So it’s increasing fast. Maybe it’s just a one month fluke, but I’m thinking it’s not. The higher cost of fuel affects almost every consumer product out there. You can’t have sustained increases in gas prices without increases in the cost of living. I’d say we’re in for some overdue rises in inflation.

So inflation appears to be on the rise, despite Bernanke’s assurance to the contrary from a few weeks ago. Maybe he was lying to us. Maybe he was just wrong. Maybe these really aren’t the droids we were looking for. What do you think?

Previous Post: « 066 Financial Excellence: What Investors Should Know about Diversification
Next Post: My Lawnmower Broke and I’m Not Going to Fix it »